Last Sunday, October the 5th, we lived a magic show in Amsterdam.

My self, I am used to tablaos (flamenco shows for small venues), my friends and colleagues as well but what happened there, it was absolutely amazing!

Everything started in August when Claudia (the dancer) she told me that she wants to move to Rotterdam for good and then I thought “Hmm… Lets help each other” so I contacted the one and only Jasper from Duende and asked the date for October. And -Thank God- it was free and mine for now on.

I started doing the promotion as I normally do .

Claudia wanted to dance a Tarantos, which we already performed in Athens (Hola Flamenco Festival) and a new solea por buleria. She asked me to feel free and sing whatever I want, so my head was about to explode the following days.

I went to Rotterdam to rehearse with Lucas and Claudia with Lucas being super enthousiastic  because of his new microphone!

The rehearsal last 2 hours and the result was emotionally honest and with high targets.

We were ready for the show!

On Sunday, the day of the performance, people kept sending me messages to find tickets but hopefully, the tablao was sold out!

Amazing! We kept a waiting list and we tried to let everyone enter, even when the room was super full, just to stand without ticket.

I was there from 14.30 to rehearse and be relaxed in the space.

I was lucky enough to have Freddy (yes, the flamenco lover 🙂  )) to help me at the entrance, for the tickets.

I was also very happy and honored to see the photographer Marjon Broeks who gave us a shoot :-). Fantastic photos !!

The show begun in an absolute silence.  Luca’s solo, a solea. To warm us up and bring us closer. Then its my turn, some cantinas de Pinini that I partly learned from David Lagos, the great flamenco singer from Jerez and after that, my favorite Fandangos and the letra that I most like from Paco Isidoro:

and its time for my Claudia, to dance her Tarantos. She managed to lead us (Lucas and myself) so good that at times I was doing jaleos in greek  being so much enthousiastic!

Small break and time to prepare for the second half!

Then a tangos, started like a tangos de Grana but it always ends in a drama : lo se que tu no me quieres, y mis fatigas publicas, que mala gitana eres like Camaron says.

And then our beautifull solea por bulerias. De-structured, simple , no much singing, no bulerias, to keep the dramatic essence of this palo high: Dicen que la pena mata, yo digo que no, que si la pena matara, de pena me hubiera muerta yo.

We closed our beautiful evening with some of the audience on stage for Bulerias!  The applause was continuing so a small second round was needed.

The feedback after the show, the meeting with friends and familiars, the hugs, the smiles, the fact that we shared something important all together to and from all directions, made us part of a unique night that I am sure it cannot be repeated. Thank you all for what you gave me there.

I am sure though we can create, together, more and different experiences . Every time is different. 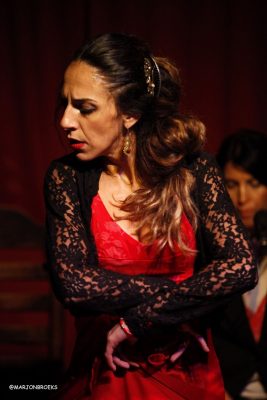 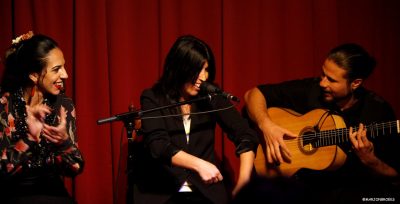 PREVIOUS ALL POSTS NEXT